Giles Life Saving and Rescue Squad was organized in 1945.  We are a total volunteer organization serving the citizens of Giles County,

Members of the Giles Rescue Squad are proud of the first 65 years of history, but are excited at the things that the next 65 years will bring.

Basic medical treatment in the past years consisted on controlling bleeding and assisting with breathing difficulty.  Today, Paramedics with Giles Rescue can perform advanced airway maneuvers, defibrillation of the heart, needle decompressions of the chest, and administer IV fluids and drugs and stabilize damage caused by internal trauma.

Originally, Giles Rescue provided only basic medical and rescue services to the citizens of the county.  Over the past 65 years, Giles Rescue has progressed with the addition of Advanced Life Support procedures, Advanced Water Rescue procedures, and Advanced Mountain Search and Rescue techniques.

Formed in September of 1945, the Giles Lifesaving and Rescue Squad, Inc. has been providing medical and rescue services for the citizens of Giles County around the clock, 24 hours a day, 365 days a year.  Originally staffed by 12 local community leaders and receiving their first ambulance and crash truck from Celanese Corp., the Giles Rescue Squad now houses 50+ members, five ambulances, a light duty crash truck and three water rescue crafts. 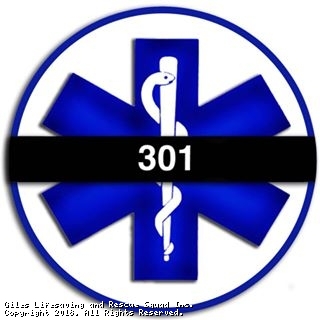 It is with great sadness that we announce the passing of Steve Davis.

Steve joined the Giles County Life Saving and Rescue Squad when he was fifteen years old and served faithfully for over fifty years. He was a lifetime member and Hall of Fame member of the VAVRS. As a youth he was baptized into the Christian faith in Narrows. He was retired from the Celanese Plant and The State of Virginia Health Dept, was a member of the Celco Fire Brigade and Giles County Hazmat Team.

We ask that you keep the family and our crew in your thoughts and prayers as we move through this difficult time.

Rest In Peace Steve, we’ll take it from here.

*Put it in your cell phone*

If you have any comments and/or suggestions, please contact the

This site has been viewed 263,441 times.
Events
Pictures
Maintained by the members and staff of Giles Lifesaving and Rescue Squad Inc.. Designated trademarks and brands are the property of their respective owners. Copyright © 2006-2022. YourFirstDue Inc. All Rights Reserved. Content on this web site is supplied by Giles Lifesaving and Rescue Squad Inc.. YourFirstDue Inc. cannot be held responsible or liable for any content, text, pictures, or any other media found on this web site.
Management login
Powered by